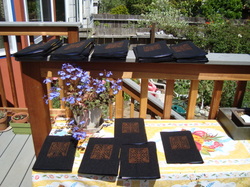 autolycus is an utterly independent literary journal, created by Genie Cartier and Emilio Aldrich. We aim to publish talented unknown writers, and sell the journal online and by consignment. All proceeds will go to the production costs of the journal. We hope to create something dripping with artistic integrity, with no funding or support of any kind from The Man.
Each copy of autolycus is handmade, and therefore each one turns out a little different from the next. We only make 25 copies of each issue, and the copies are numbered. We put out 2 issues per year, one in May/ June, and one in December.
Autolycus, by Francis Cartier

He’s a rogue and a thief in “A Winter’s Tale,”
Stolen by The Bard from the mythical Greeks,
A con-man so clever at eluding jail,
Lying and scheming whenever he speaks.

Shakespeare paints him as a foxy sinner
Just as he was as a Greek demi-god.
Now here he is again, that cunning winner,
So here we embrace him. You might think it odd,

But all poetry’s stolen from
Some earlier author (sometimes from truth)
Just as crafty Autolycus can become
An ancient poet feigning youth.